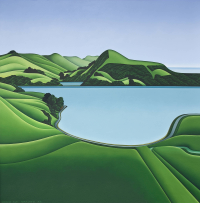 The Urban Art Foundation (UAF) will launch its 40th exhibition on Friday, 15 April which will comprise 106 artworks selected from The Fletcher Trust Collection . The exhibition can be viewed on Urban Art’s new Parliament TV programme called arTVox from Friday April 15 to Tuesday May 3 and on all future occasions when the House is not in session.

Urban Art Founder and Creative Director Andrew Hagen said: “This exhibition coincides with and celebrates the 60th anniversary of The Fletcher Trust art collection. It features among the best examples of art from this country’s most well-known and critically acclaimed artists.

While specially curated exhibitions of works from the collection regularly tour Aotearoa art institutions, with the Trust’s assistance, this UAF exhibition will take artworks from the collection into shopping malls, gateways and on-street signage across the country, as well as screening 106 pieces on our arTVox programme on Parliament TV , when Parliament is not in session.”

The arTVox televised part of the exhibition begins with a piece by William Hodges created in 1773 and goes through in chronological order to 2021, with a work by Jacqueline Fahey called ‘In My Studio’.

Over the past four years, the UAF has worked in conjunction with artists, art and education experts, government and commercial gallery curators, private collectors, and outdoor media company oOh!media to present 40 exhibitions, appearing in Shopping Malls, on Street signs, the Wellington Railway Station and International Airport.

Late last year UAF signed an exclusive agreement with the Clerk of the House, David Wilson, to show Urban Art Exhibitions on Parliament TV, Freeview 31 and Sky Channel 68 when the House is not sitting. The programme is called arTVox, and its first exhibition went to air on 16 December 2021.

Andrew Hagen said: “We are elated and thankful for this new digital venue to show the best of our nation’s art such as this exhibition featuring artworks from The Fletcher Trust Collection. Making art accessible to the public is our kaupapa, our name, ki te marama means into the light.”

About the Urban Art Foundation

The Urban Art Foundation is a not-for-profit charity (Charities registration number CC59508) committed to making art accessible on streets and in public gateways to enrich New Zealander’s experience of their urban environment. It takes art created by New Zealand artists out of archives and displays it in contemporary easily accessible, outdoor digital media sites – street furniture - for people to view as a source of enjoyment and education.

This is achieved through an association with outdoor media company oOh!media who provide electronic billboards on city centers, shopping malls and bus shelters in throughout New Zealand.

In late 2021, UAF signed an exclusive agreement with the Clerk of the House, David Wilson, to show Urban Art Exhibitions on the Parliament TV, Freeview 31 and Sky Channel 68 when the House is not sitting. That programme is called arTVox and first went to air on 16 December 2021.

New Zealand continues to be the only country in the world that presents art to the public in this manner on an ongoing basis, with up to three million pedestrians being exposed to the works during the course of an exhibition.