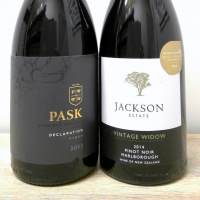 Two pioneering New Zealand wineries, Jackson Estate based in Marlborough, and Pask Winery based in the Hawkes Bay, have joined forces under the stewardship of the Wellington based Benton Family Wine Group.

Both wineries have operated for over 30 years at the premium end of the market.

In 2013, the Group acquired Jackson Estate and has now completed a full restructuring and turnaround of the Company.  This has seen increased distribution and sales across domestic and all export and has provided the confidence to complete a state of the art winery on Jackson’s Road in Marlborough, in Pinot Noir.

The same enthusiasm and attention that has the Jackson Estate brand will be applied to Pask.

Jeff Hart who has been appointed Managing Director of the enlarged said:

“The merger will provide shared benefits through increased size, enhanced product range, and geographical diversity.  Following the successful restructuring of Jackson we can now turn our attention to revitalising the Pask brand and fully utilising the considerable Pask assets.”

Pask has a winery on Omahu Road and 60 hectares of vineyards in the renowned Gimblett Gravels.

John Benton will Chair both companies, while Chris Pask will retain his involvement with Pask Winery as the Founding Director on the Pask Winery Board.

Jeff Clarke has been appointed the Group’s chief winemaker.  Jeff, who began his winemaking career in Australia, has been involved as Head Winemaker at Pernod Ricard and more recently Ara Wines.

Jeff Hart said, “Jeff Clarke has an outstanding reputation for consistently producing world class wine. His appointment will build on the shareholder vision, direction, and standing of both brands.”

“The merger comes on the back of the prestigious International Wine Challenge in London where Pask’s 2014 Declaration Chardonnay won Gold and the Hawkes Bay Trophy, Pask’s Declaration Syrah won a Gold medal, as did Jackson Estate’s 2014 Vintage Widow Pinot Noir.”

Jackson Estate and Pask Winery to Merge
+ Text Size -
Do NOT follow this link or you will be banned from the site! Original generation time 13.3727 seconds. Cache Loaded in: 0.0125 seconds.