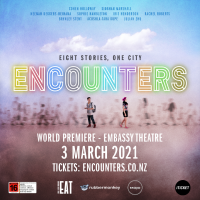 Oneshot Collective has announced that Wellington’s Embassy Theatre will host the world premiere of its anthology feature film Encounters on Wednesday, 3 March 2021, releasing the trailer for the film last week. After a one-night-only chance to see the Wellington-shot film on the big screen, the film will be available to rent or buy OnDemand following the screening.

With a 50-50 gender split in filmmaking voices, the multi-genre film was independently made and shot throughout the Wellington region. Produced through Oneshot Collective, Encounters is collaborative, independent filmmaking for a new generation of emerging New Zealand screen talent. Work started on the project in mid-2014, with the intention of encouraging collaboration and providing opportunities for emerging screen talent to gain experience outside the realm of short films.

Producer Anita Ross adds, “This film has been such a marathon and I’m very proud that we’ve been able to reach the finish line to release it into the world. Every independent filmmaker who has made a feature knows the workload involved in reaching this point, so we’re looking forward to celebrating that!”

Encounters will have its world premiere on 3 March 2021 at Wellington’s Embassy Theatre before being globally available to rent or buy OnDemand. Tickets are available through iTicket and more information is can be found at: encounters.co.nz
ENDS

Wellington to host World Premiere of Anthology file Encounters
+ Text Size -
Do NOT follow this link or you will be banned from the site!