The RBNZ’s approach to communication has faced some criticism following last week’s cut in the OCR, which surprised many bank economists, leaving some confused and others plain flabbergasted.  This is not an attempt to defend the RBNZ, but to look at the facts.

In our assessment, the main message from the Monetary Policy Statement was to reiterate that it is the outlook for future inflation that determines policy decisions.  It is a reminder to remain focused on the economic signals – to avoid playing the man not the ball.

Only a couple of bank economists picked that the RBNZ would cut interest rates last week, with market prices only assigning a 20% probability on the OCR being cut to 2.25%.

Most pointed to the Governor’s speech on 3 February as a factor that deterred them from expecting a cut in interest rates at the next meeting in March.  In that speech, the Governor noted that it would be wrong for the RBNZ to take a “mechanistic approach” to current low headline inflation, as that would not draw on the flexibility in the Policy Targets Agreement (PTA).  This was taken as a definitive and timeless indication that the Governor was a so-called “reluctant cutter”.

In large part, that segment of the speech was aimed at politicians and other members of the public that had taken a simplistic approach.  It served to remind them that the RBNZ can only influence future inflation, not current or past inflation.  What went largely ignored was the rest of the speech, which detailed at great length all the downside risks from the global economic outlook.  This came hot on the heels of the January OCR Review where the RBNZ had moved to an official easing bias. 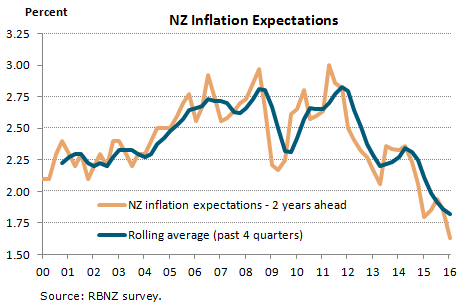 Central banks everywhere are always at pains to emphasise that their plans are not set in stone, but conditional on the emerging flow of economic data.  It is clear from the March MPS that the economic news that finally tipped the RBNZ into acting on their easing bias was the fall in inflation expectations.

Right up until the December, the RBNZ were clinging onto the idea that NZ inflation expectations remained “well anchored”, despite survey measures trending down from 2.5% to 2.0%.   Survey measures fell materially further in February.  It is hard to remember a domestic development causing the RBNZ “concern” since the Christchurch earthquakes.  However, that is the language they used to describe the prospects of low inflation becoming imbedded stubbornly into wage and price setting behaviour.

In many respects, the March MPS reaffirmed what was already clear.  That is, first and foremost, the primary objective of the RBNZ is to set interest rates to try and keep future inflation near the 2 percent target midpoint.  When setting interest rates, all the other stuff in the Policy Targets Agreement (PTA) about taking into account the efficiency and soundness of the financial system, and seeking to avoid instability in output, interest rates and the exchange rate are secondary considerations.  They are almost “nice to haves”.

Ideally, RBNZ’s monetary policy and financial stability objectives are reinforcing.  If the RBNZ has specific concerns about the housing market, it has specific targeted macroprudential tools at its disposal.  If anything, the further cooling in Auckland housing market data since December should have helped downgrade those concerns.

In our opinion, all the commentary about the Governor being a “reluctant cutter”, obsessed with Auckland house prices, or permanently scarred by observing the US housing boom while located in Washington risks ignoring the economic drivers of inflation.  In rugby, you would be penalized for playing the man and not the ball.

So where does this all leave the outlook from here?

The RBNZ have retained an easing bias and their 90 day bank bill rate projections imply the OCR falling to 2.00%.  The message from the March MPS is that we are left focusing on the fundamental determinants of future inflation.  This includes, amongst other things, all the usual suspects, such as the level of the NZ dollar, export prices, the global outlook, NZ GDP growth, house price inflation and net migration.  However, at the top of the list is inflation expectations.  Ignore these survey measures at your peril.

Christian Hawkesby, Director at Harbour Asset Management
This column does not constitute advice to any person.
Disclaimer

Playing the man not the ball
+ Text Size -
Do NOT follow this link or you will be banned from the site! Original generation time 2.5519 seconds. Cache Loaded in: 0.0270 seconds.