After interest rates cuts in June and July, a reluctant RBNZ is under pressure from the market to deliver another cut at its September meeting and to signal more to come.  The only real question is what will tip it over the edge.

This week has been a torrid time for global markets, with volatility in equity markets not seen since the GFC.  Stepping back, the NZ macroeconomic backdrop has also changed considerably over the past 12 months.  Many of the sectors that had been providing tailwinds for NZ economic growth have now become headwinds.

Not only have dairy prices fallen sharply, but they have reached a level where they are unsustainable for the NZ economy; a significant bounce in dairy prices is required to merely bring prices back to breakeven for dairy farmers.  At the same time, the peak of the Canterbury rebuild activity looks to have occurred earlier than expected.  Business confidence has also experienced a fairly broad based fall across the country, by region and sectors.

As always, there are some pockets of offsetting news.  Exporters outside the dairy industry are benefiting from the lower NZD; tourism numbers are high; net migration remains near records levels; and there are anecdotes of a positive spillover from Auckland house prices into regional housing markets.

However, on balance, the growth outlook has deteriorated, with some bank economists cutting their growth forecasts to a fairly modest rate of 1 to 2%, making a recession a plausible downside risk.  Lifting inflation back to the 2% mid-point of the RBNZ’s CPI inflation target range for the first time since 2011 is becoming more challenging.

Markets love to be forward looking, and the momentum of the NZ economy points to either weakness in the NZ dollar or the RBNZ needing to deliver more cuts in the OCR.

Since its July meeting, the RBNZ’s approach has been to apply a handbrake on the market getting ahead of itself.  In his latest speech, the Governor highlighted that to forecast aggressive OCR cuts the RBNZ would need to be forecasting a recession.  In fact, the RBNZ isn’t really even forecasting a slowdown at all – more a case of the economy continuing to grow at 2% to 3%, supported by historically low interest rates.

There is a tactical element to the RBNZ’s approach: they want time to assess the economy in more depth; they want to keep the threat of further cuts available without using their ammunition too early; and they want to avoid the volatility of cutting the OCR aggressively in 2015 only to raise the OCR again in 2016.

A key judgement for the RBNZ is its assumption for the neutral OCR – a theoretical concept of where it expects the OCR to settle once inflation is at target, the exchange rate is at fair value, and the economy has neither spare nor excess capacity.   Before the GFC, the RBNZ saw the neutral OCR at around 6%.   It now estimates it to be in the range of 4% to 5%.  The implication is that it sees the current OCR at 3% as stimulatory, even before taking any action in September. 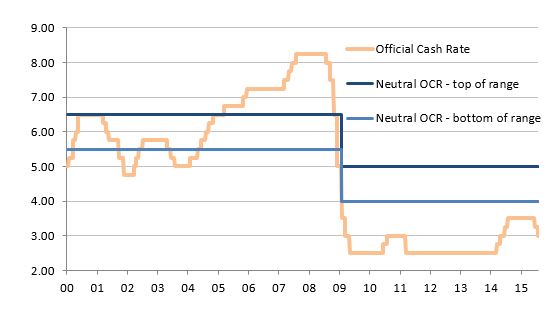 So what do the RBNZ need to see to change their view?

Global markets are moving rapidly, although unless financial stress becomes evident central banks tend to stand back and watch.  As a result, it may take a more dramatic event to change the RBNZ’s stance, like stress in the dairy sector that spilt over into the banking sector or wider economy.  Equally, the Canterbury rebuild slowing in a more disorderly way could see the RBNZ revise its economic outlook.

The more difficult one to pick is the RBNZ’s view on the neutral OCR.  Here there is a tipping point that is very hard to foresee.  At some stage if CPI inflation remains below target long enough, white smoke could appear from the top of No 2 The Terrace in Wellington and the Governor could announce that the neutral OCR is no longer 4-5%; but rather 3-4%.  The implication would be that interest rates need to be lower for longer to get inflation back to target.

The market is currently pricing an 80% chance of the OCR being cut to 2.75% at the September Monetary Policy Statement.  With the RBNZ acting as a handbrake on a market pricing more aggressive action, it is shaping up to be an interesting standoff – even if the RBNZ deliver a hawkish message, the market may not quite believe it.